Showing posts from July, 2015
Show all

July 31, 2015
Procurement and supply chain management officers in the Civil Service have been advised to not distance themselves from the procurement process for construction works involving the state.
While admitting that the procurement process in construction works was complex, the Director of Procurement of the Civil Service, Dr Tett Affotey-Walters, said their involvement was crucial to ensure that the country had value in terms of competitiveness and ensuring transparency and fairness.
“Your work is not just about buying stationery and getting quotations for vehicles, you need to be involved in works because even a one-per cent savings in the procurement process for infrastructure could mean saving a lot for the country,” he said at the annual general meeting of the national executive of the Civil Service Procurement and Supply Chain Management Class Association (CSSMMCA) in Accra yesterday.
The AGM is used to discuss the challenges and prospects facing the association an…
Post a Comment
Read more

July 31, 2015
A renowned Ghanaian engineer, Mr Robert Wood, has challenged the government to use home-grown solutions to tackle the country’s energy crisis.

He observed that apart from solar, wind and biogas, the country could depend on the tonnes of waste timber left behind in the forest to generate energy to deal with the crisis.
According to him, instead of looking outside the borders of Ghana to find solutions, the government should concentrate on the use of local resources to deal with the situation.
Mr Wood, who was speaking at a lecture organised by the Alliance for Transformational Leaders at Madina in Accra last Monday, said the current programmes being implemented by the government would not bring long-lasting solutions to the problem.
Among other things, the government is investing in power barges, thermal plants and possibly nuclear and coal plants.
“Currently, we are not finding the right solutions because we are depending on oil or gas for solutions to the crisis. We…
Post a Comment
Read more

• An official of the Santa Lucia education directorate (second left) presenting a certificate of merit to Master Emmanuel Sarpong Agyemang. Flanking them are the parents of Master Agyemang.

A 13-year-old Ghanaian pupil is making waves in Santa Lucia, a district in the Italian city of Verona, after emerging the best student in the district basic school examination.
Master Emmanuel Sarpong Agyeman emerged tops in the Esame Di Stato examination, the equivalent of Basic Education Certificate Examination (BECE) in Ghana.
According to reports, what was surprising to many was that Emmanuel did not start nursery school in Verona. He arrived in Verona in
June 2011 and started primary or elementary school at the final stage in Class Five.
The primary system in Italy is not six years as it is in Ghana.
At the end of the third year, the final examination is based on Mathematics, Science, English and Italian.
After that, the international students are asked to write essays on th…
Post a Comment
Read more

July 31, 2015
The government is reviewing all laws concerning exemptions granted to importers to ensure that the country gets value for money from such exemptions, a tax policy advisor at the Ministry of Finance (MoF), Dr Edward Larbi-Siaw ,has said.

According to him, the exemptions which cost the government a lot of revenue was denying the state millions of cedis.
Dr Larbi-Siaw was speaking at a forum organised by the Ghana Revenue Authority (GRA) to engage the country’s freight forwarders on the National Single window project.
The event was part of a two-day conference organised in collaboration with the Ghana Institute of Freight Forwarders (GIFF) and the Council for the Regulation of Freight Forwarding in Nigeria CRFFN).
It was on the theme “Intra African Trade—the Role of the National Single Window.”
The conference is aimed at increasing the knowledge of the representatives of stakeholder groups—both public and private— on a wide range of issues which are critical to the Cust…
Post a Comment
Read more

July 31, 2015
The Veterinary Services Department of the Ministry of Food and Agriculture (MoFA) has temporarily placed a ban on the sale and movement of live birds within Accra to prevent further outbreaks of Avian Influenza in the city and its environs.

This means poultry, including fowls, ducks, turkey and geese, cannot be sold or moved around Accra.
A statement signed by the acting Director of the Veterinary Services Department , Dr Ben Aniwa, said, “The general public and, especially cockerel and pullet vendors, are advised to cease the practice until further notice as their movement from place-to-place poses a threat to both humans and birds.”
According to the statement, two of the outbreaks in the region had been linked to vendors.
The Veterinary Services Department has, therefore, called on the security services and the public to cooperate with the internal movement control of street poultry vendors.
Bird flu is a deadly strain of a virus that attacks poultry and kills them af…
Post a Comment
Read more 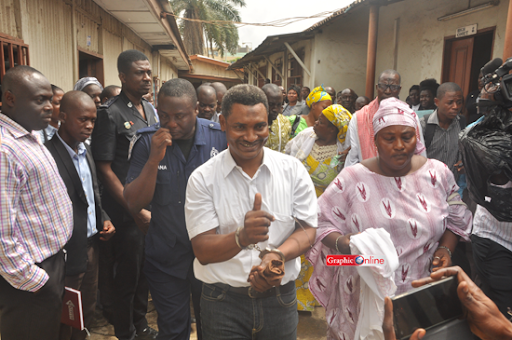 Weeping and wailing took centre stage at the Accra Circuit Court on Monday when Sulley Ali-Gabass, the medical doctor charged with defiling a 16-year-old boy, was found guilty and sentenced to 25 years’ imprisonment.
Immediately the Presiding Judge, Ms Rita Agyeman Budu, pronounced judgement and rose to her chambers, the convict’s wife broke down, saying in Hausa, “What will I tell the children? What will I tell them?”
Some family members of Ali-Gabass, who were themselves wailing, struggled to control the woman, who kept mentioning the names of her children.
Ali-Gabass displayed no emotions and attempted to console his wailing wife, saying, “It is okay; it will be okay,” before he was whisked away to begin his life behind bars after being found guilty on the first count of defiling the boy at a time he was below 16 years.
Sporting neatly cropped hair, blue jeans and a white short–sleeved shirt which was neatly tucked in, Gabass stood in the dock with his hands be…
Post a Comment
Read more

Azorka, Bamba Boys to be disbanded; Invincible Forces, Bolga Bull Dogs will not be spared

July 31, 2015
A security expert, Mr Emmanuel Sowatey, says it is time politicians stopped using vigilantes in political activities, as there are repercussions that go beyond politics.
“The vigilantes have become local mercenaries who sell their services and use their expertise in difference circles. It is not only politics.
“Politicians think they are using these people for political expediency but these vigilantes, on the other hand, use the politicians as a shield for criminal activities.
“They (vigilantes) have a powerful network around them made up of politicians, chiefs and influential people in society, so that when they commit crime, they activate this network to get them out of trouble,” he told the Daily Graphic.
He, therefore, urged the police to take immediate action to arrest and prosecute the perpetrators of the violence that characterised the Talensi by-election won by the National Democratic Congress (NDC) candidate, Mr B.T. Baba.
“If we are able to deal with the …
Post a Comment
Read more
July 31, 2015
We’re disturbed — Alogboshie, surrounding communities cry out
Post a Comment
Read more