Showing posts from April, 2016
Show all

NRSC rolls out campaign for safety during elections

April 30, 2016
The National Road Safety Commission (NRSC) is rolling out a programme to reduce the casualties that come with election campaigns.
The project, which starts at the regional level next month, will have NRSC officials engage the parties on how to run their campaigns safe and devoid of road accidents.
“We would want them to commit themselves to the fact that if they protect their supporters, they’ll get votes but if they don’t, they’ll lose them and that goes to affect the final election result because every vote counts,” the Commission’s Director of Planning at the NRSC, Mr David Adonteng, told the Daily Graphic.
Political party road safety officer The Commission plans to play an active role in ensuring that the carnage on the country’s roads is reduced first by ensuring that each political party appoints a road safety officer for its campaign team.
As part of the road safety campaign, commercials will be run in the electronic media and outreach programmes organised to draw the voting public…
Post a Comment
Read more

Rail transport in Africa: tales from Accra and Jo'burg 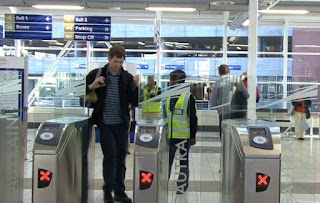 The cold and chilly weather spared no one. Long-flowing overcoats drop to the knee and most hands were either buried deep in trousers or in gloves ostensibly to tame the cold.


There is very little chitchat as eyes sweep across the day’s newspapers and magazines.  A few people with little interest in reading but with ears blocked with earpieces had their heads nodding and feet tapping to music streaming from their phones.

The digital clock announced the time as 7.25 a.m., and as the seconds wore into minutes, eyes were fixed on the clock. Five minutes later, it arrived just on time — 7.30 a.m. as predicted.

The Gautrain
As if on cue, scores milled out and scores of others replaced them. It is a cold morning in July and this is the daily routine of passengers of the Gautrain – South Africa’s 80-kilometre mass rapid transit railway system in Gauteng Province — which links Johannesburg, Pretoria, Ekhuruleni and OR Tambo International Airport.

Rail transport in Africa: tales from Accra and Jo'bug