December 21, 2012
The just-ended elections have proven once again that Ghanaians have long understood the vital importance of peace and stability.

“Ghana is surely a model of democracy in Africa and the recent elections have proven the maturity of Ghana’s democracy,” the Nigerien Ambassador to Ghana, Hajia Hajio Abdoulmoumine, said at a cocktail event in Accra to celebrate the National Day of Niger.

The ambassador also congratulated President John Dramani Mahama and all the newly elected members of  the sixth Parliament of the Fourth Republic. 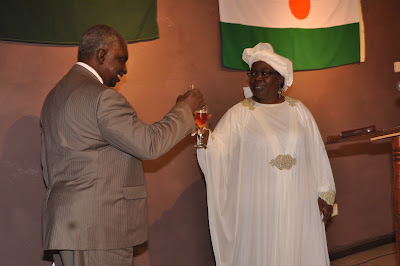 On August 3, 1960, Niger gained full independence from France, after having been a colony since 1922. The country had voted to become a republic on December 18, 1958. August 3 is a national holiday celebrating Independence Day, while December 18 is a Republic Day.

The event attended by diplomatic corps marks the establishment of a republic and the presidency in that country. The main celebrations are held in the capital Niamey, which is also the largest city of the country.

During the holiday, the country organises public parties and festivities nationwide. Sports competitions, musical concerts, and arts and craft exhibitions also feature prominently in the celebrations.

Ghana and Niger formalised diplomatic relations in the 1960s and subsequently signed their first trade agreement in 1963 with ten other successive agreements most of which are still pending ratification.

The ambassador, therefore, made a case for reviving a permanent Joint Commission of Cooperation which was signed and ratified in 1971 but has been in the freezer since 1989.

Land-locked Niger is the world’s second largest producer of Uranium, and also rich in minerals including gold, phosphate, coal, volumes of hydrological potential, and more recently oil but in spite of all these resources, the country remains one of the poorest in Africa.

That, the ambassador said, was set to change as the country led by President Issoufou Mahamadou was implementing an ambitious programme –‘Rebirth’.

“Rebirth has an ambition to overcome several socio-economic issues, which are challenges to current authorities,” she said.

According to her, the initiative meant that Nigeriens would feed Nigeriens adding that “that is why we are exploring every valley, every stream, and every piece of land that can be cultivated and watered so that effectively Nigeriens feed Nigeriens.”

With Malian political crisis at its peak and the Libya yet to find its feet after the toppling and killing of Muamar Al Gaddafi, Niger is facing the repercussions of a region in crisis as it shields itself from the spillover of the violence from its two neighbours.

To that, the Nigerien ambassador said “we are aware that peace and security in Niger and in the region is necessary for durable and long-term development. Unfortunately, despite a hostile environment, the people of Niger must also face the consequences of the crisis in the region.”

Mr Ben C. Eghan, Ghana’s Secretary to cabinet, observed that relations between the two countries continued to be cordial due to the fact that the two countries were closely related historically,culturally and economically, resulting in an increase in the movement of people, goods and services.

“There is no gain saying that the fact that Ghana-Niger relations is moving into high levels of cooperation, on the wings of people-to-people contacts, and driven by the private sector, making it sustainable and mutually beneficial,” he added.