The first is to upgrade the sewer and drainage infrastructure within the Odaw Basin which will include covering, de-silting, dredging, construction of new siltation ponds and the removal of refuse from and complete reconstruction of priority drains and restoration of the Korle Lagoon, as well as any additional works determined during the feasibility and design stage.

Specifically, the project will include the construction of a new solid waste re-cyclable sorting facility to sort out 450 metric tonnes of waste a day, in addition to helping the Accra Metropolitan Assembly (AMA) develop a comprehensive, modern, innovative and cost-effective solution for the overall waste management challenge.

Also, 570 metres of new covered drains will be constructed at Mataheko, with 2.6 km at Mamponse and 920m at South Kaneshie. Others include the revitalisation and dredging of 500,000 cubic metres of the Korle Lagoon and the construction of 20 hectares of permanent sedimentation basins upstream along the Odaw Channel from the Aburi Hills.
﻿
The project, which is being executed by an American construction firm, Conti Ghana, with support from Zoomlion and WaterTech, is being funded under a credit facility from the Export Import (Exim) Bank of the USA and the Standard Chartered Bank.

Speaking at the function, President Mahama said the project would revolutionise the sanitation and sewage situation in Accra and end the perennial flooding of the city.

He said if the project was successful, it would be replicated in the other regions of the country.
President Mahama urged the public to desist from dumping refuse into open drains and building on water courses, since those practices resulted in flooding in the cities.

He stressed the need for people to be advocates for good sanitation practices by impressing on their neighbours to dispose of their refuse at designated collection points.

The AMA Chief Executive, Dr Alfred Okoe Vanderpuye, gave an assurance that the assembly would enforce its bye-laws to ensure that the project achieved its objectives.

The problems of flooding and sanitation in Accra are further compounded by the large population of the city, which is approximately 2.3 million, and has been growing at a high annual rate of four per cent since 1984.

In that regard, the Charge d’Affaires of the US Embassy, Ms Patricia Alsup, said the US was proud to have played a role in dealing with the perennial flooding and waste management problems confronting the city.

Accra, which is sited on a low-lying ground, experiences flooding annually mainly because of the haphazard construction of houses, especially on water courses, and poor drainage and waste management system that makes the drains choked with garbage. 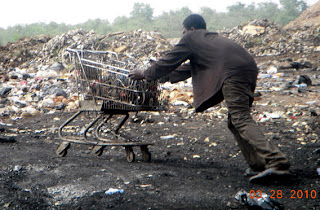 Efforts by the city authorities to check the situation continues to be undermined by recalcitrant residents and the weak enforcement of bye-laws.
In 2009 and 2011, the floods that swept through Accra resulted in several deaths and  the destruction of property running into millions of Ghana cedis.

For his part, the Chief Executive Officer of the Conti Group, Mr Kurt Conti, pledged the company’s commitment to ensure that the project was completed on schedule. 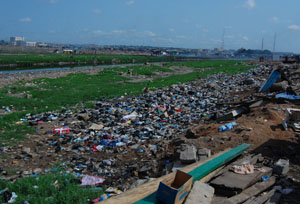 The Korle Lagoon Restoration Project which started some years back has hit a snag, as it has been plagued with uncontrolled waste dumping in a city that generates 2,500 metric tonnes of waste but struggles to cope with its management.